Disclosure: This is a sponsored post in collaboration with Disney Studios.  All opinions expressed are my own. Thank you for supporting our family

Incredibles 2 is one of the biggest hits that Disney Studios produced this year and it is really one for the family!  There is comedy for all, Dad behavior throughout, sibling disputes, boss baby and of course Mom to the rescue.

I appreciated the storytelling that had a conversation with everyone but a big treat for me was the costuming.  The costume designers’ costumes were so precise and done with intention.  I loved how animation expressed it the movement and power of the superhero and power suits.  For the release of Incredibles 2 on Blu-ray I am taking a peak behind the scenes of two of my favorite characters from the film.  Lucius Best and Edna Mode.

I’m sharing a collection of bonus material and concept art featuring the heroics of Frozone from one of my favorite actors Samuel L Jackson and the fashion preciseness of Ms. Mode.   INCREDIBLES 2 is now available on Digital HD, Blu-ray 4K Ultra HD™, Blu-ray™, DVD and On-Demand!

LUCIUS BEST (voice of Samuel L. Jackson) is not only Bob’s best friend, he’s a fellow-former Super who’s so chill, he can make ice with the point of a finger. But even when he’s not fighting crime as Frozone, Lucius is all about style. He has a quick wit and a cool, can-do attitude—and he wouldn’t think twice about breaking out his super suit if it could help bring Supers out of hiding.

Edna is not afraid of color or shapes.  She’s included in a fashionable assortment of bonus clips and concept art that highlight the world of Edna Mode, including a look at her deleted rival, Galbaki!

EDNA “E” MODE (voice of director Brad Bird) possesses impeccable design sense, a keen understanding of cutting-edge technology and an unmatched skillset. A creative visionary, she longs for the return of Supers so she can once again create functional yet cutting-edge supersuits. 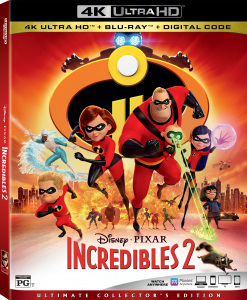 ABOUT THE WALT DISNEY STUDIOS:

For over 90 years, The Walt Disney Studios has been the foundation on which The Walt Disney Company was built. Today, the Studio brings quality movies, music and stage plays to consumers throughout the world. Feature films are released under the following banners: Disney, including Walt Disney Animation Studios and Pixar Animation Studios; Disneynature; Marvel Studios; and Lucasfilm. The Disney Music Group encompasses the Walt Disney Records and Hollywood Records labels, as well as Disney Music Publishing. The Disney Theatrical Group produces and licenses live events, including Disney on Broadway, Disney On Ice and Disney Live!.

Please sit with me

In The Know: Chinese Lantern Festival To Light up the Night in Pomona

Jack Black is Po in Kung Fu Panda and the 3rd Time is A Charm!!!

Los Angeles Got Lost In Music with Sony!

The Notorious Ruth Bader Ginsburg, On The Basis of Sex