Disclosure: This is a sponsored post in collaboration with Warner Bros.  All opinions expressed are my own. Thank you for supporting our family.

Teen Titans GO is a favorite in our house.  I watch the show at least once weekly with my sons.  I first fell for Teen Titans GO when I saw the episode about the VCR clock.

I was hooked because the humor was so accurate for my time growing up in the 80s during the peak of the VCR era.  Cyborg joked about how everytime you went to someone’s house the clock on their VCR was always blinking.  The time was never set. LOL!!  This grabbed me instantly because it was something that I noticed and always laughed as a child.

Since being a successful hit TV show it’s only right that these teens would try their luck at the silver screen.  Like the series, Teen Titans GO to the Movies is no neighbor to seriousness but, there are opportunities to pick up on several “morals to the story” while watching the show and movie.

The movie asks the question “what makes a superhero?”  The teen superhero group go on a Hollywood style adventure in pursuit of their own movie.  As you’d expect they encounter several ups and downs.  Along the way, you’ll laugh and learn a bit about becoming a superhero and getting a Hollywood movie deal. 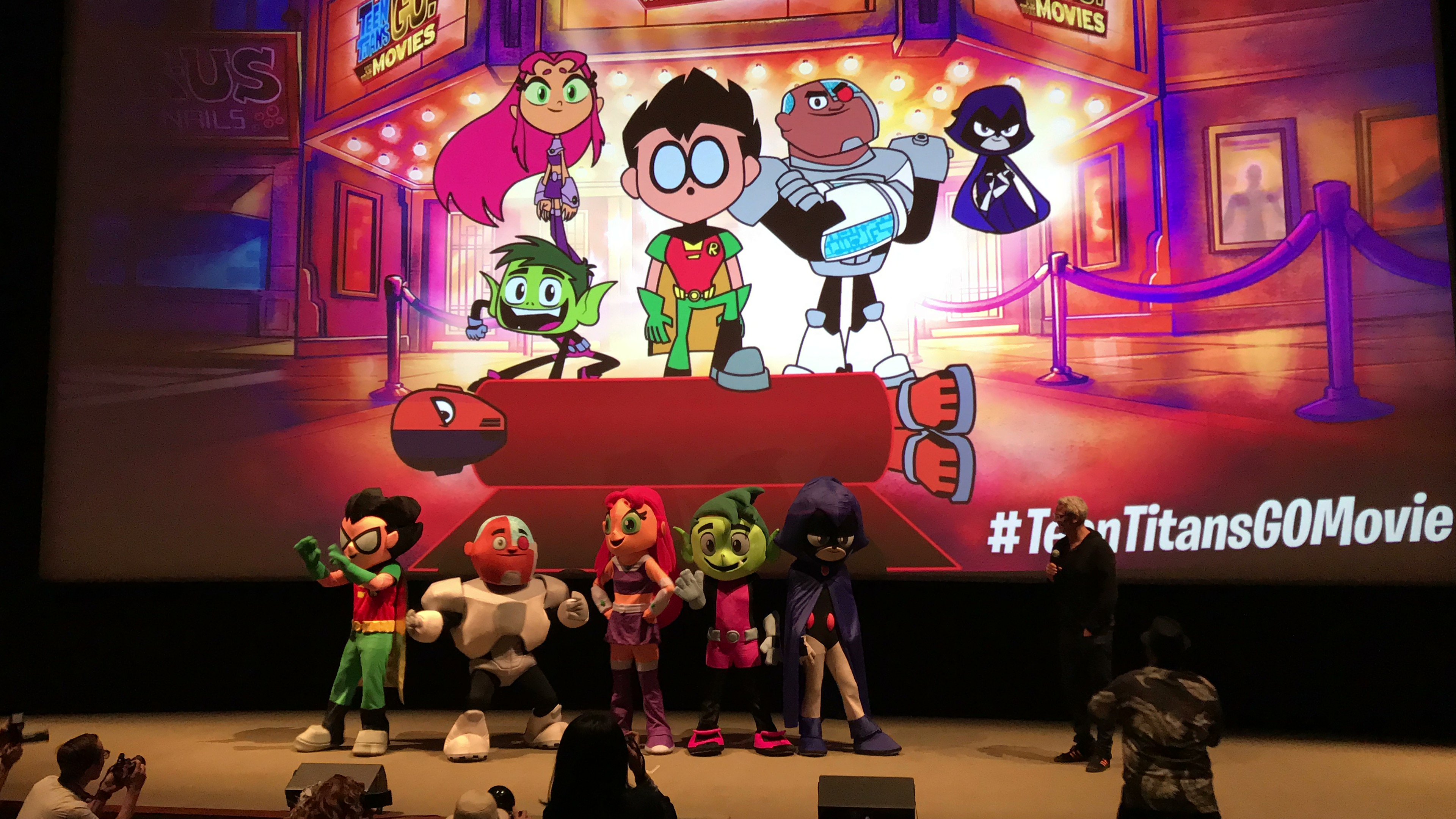 Introducing Teen Titans GO to the Movies is Sam Register, president of Warner Bros. Animation and creator of Teen Titans GO along with Robin, Cyborg, Starfire, Beastboy and Raven !

After the film, Hunter and Hendrix had the experience of a lifetime.  They went inside a Warner Bros. recording studios and had an ADR  (additional dialog recording) session complete with a professional ADR coach!

They were able to choose a character from the upcoming movie.  It was amazing to experience life in the shoes of voice actors when recording Teen Titans GO to the Movies. 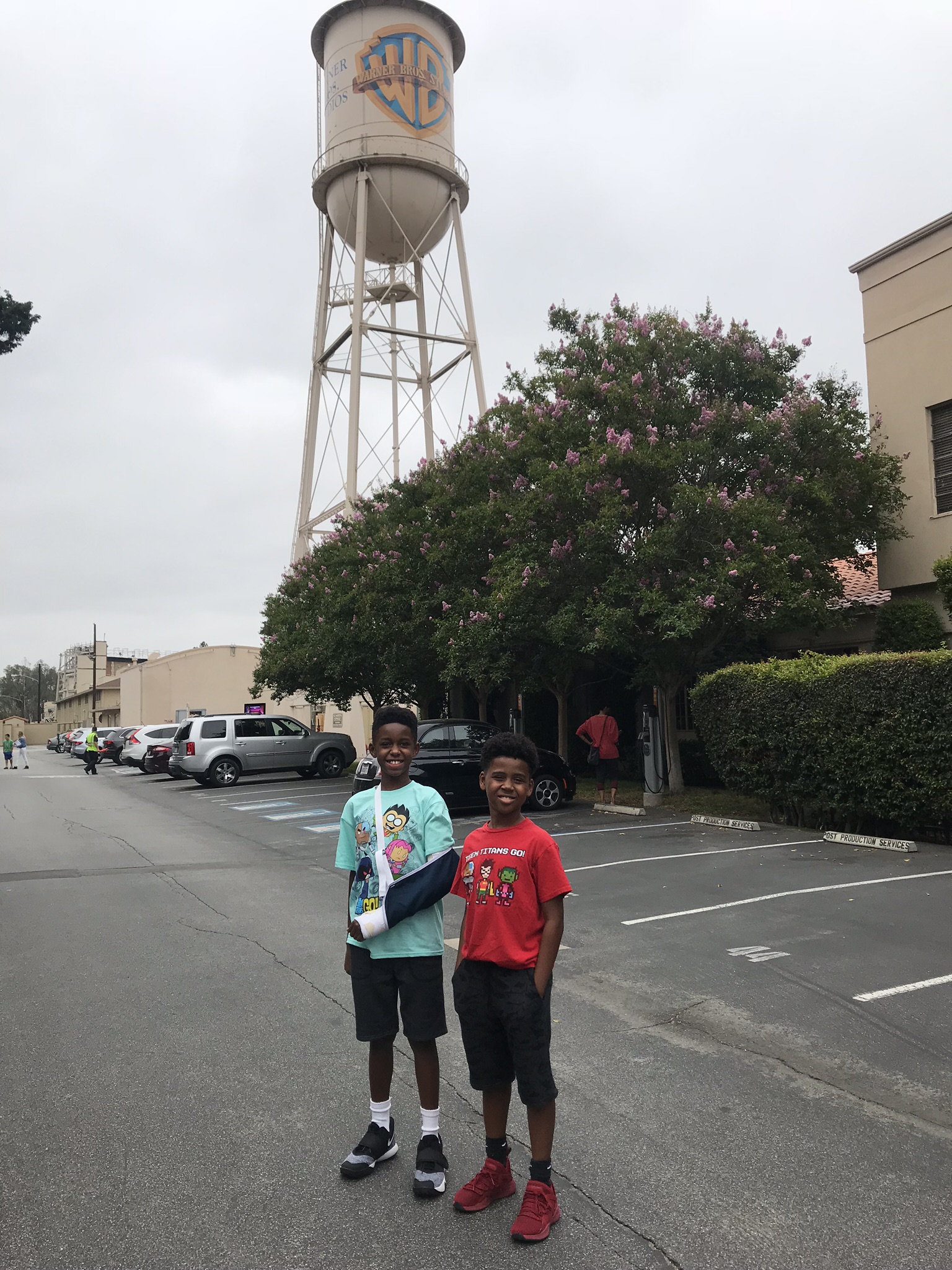 When the Teen Titans go to the big screen, they go big!  “TEEN TITANS GO! TO THE MOVIES” finds our egocentric, wildly satirical Super Heroes in their first feature film extravaganza—a fresh, gleefully clever, kid-appropriately crass and tongue-in-cheek play on the superhero genre, complete with musical numbers. It seems to the Teens that all the major superheroes out there are starring in their own movies—everyone but the Teen Titans, that is!  But de facto leader Robin is determined to remedy the situation and be seen as a star instead of a sidekick.  If only they could get the hottest Hollywood film director to notice them.  With a few madcap ideas and a song in their heart, the Teen Titans head to Tinsel Town, certain to pull off their dream.  But when the group is radically misdirected by a seriously Super-Villain and his maniacal plan to take over the Earth, things really go awry.  The team finds their friendship and their fighting spirit failing, putting the very fate of the Teen Titans themselves on the line!
Rated PG for action and rude humor.

Teen Titans Go to the Movies opens nationwide on July 27!

*Thank you, Warner Bros. for hosting my family at the screening for Teen Titans Go to the Movies  All opinions expressed are my own.

MARVEL’S ANT-MAN AND THE WASP FLIES INTO THEATERS JULY 6!

It’s the 2018 Maison Noir LOVE DRUNK Rosé for Me

TEEN TITANS GO! TO THE MOVIES released on DVD & BluRay on October 30th, on Digital NOW.

MARVEL’S ANT-MAN AND THE WASP FLIES INTO THEATERS JULY 6!